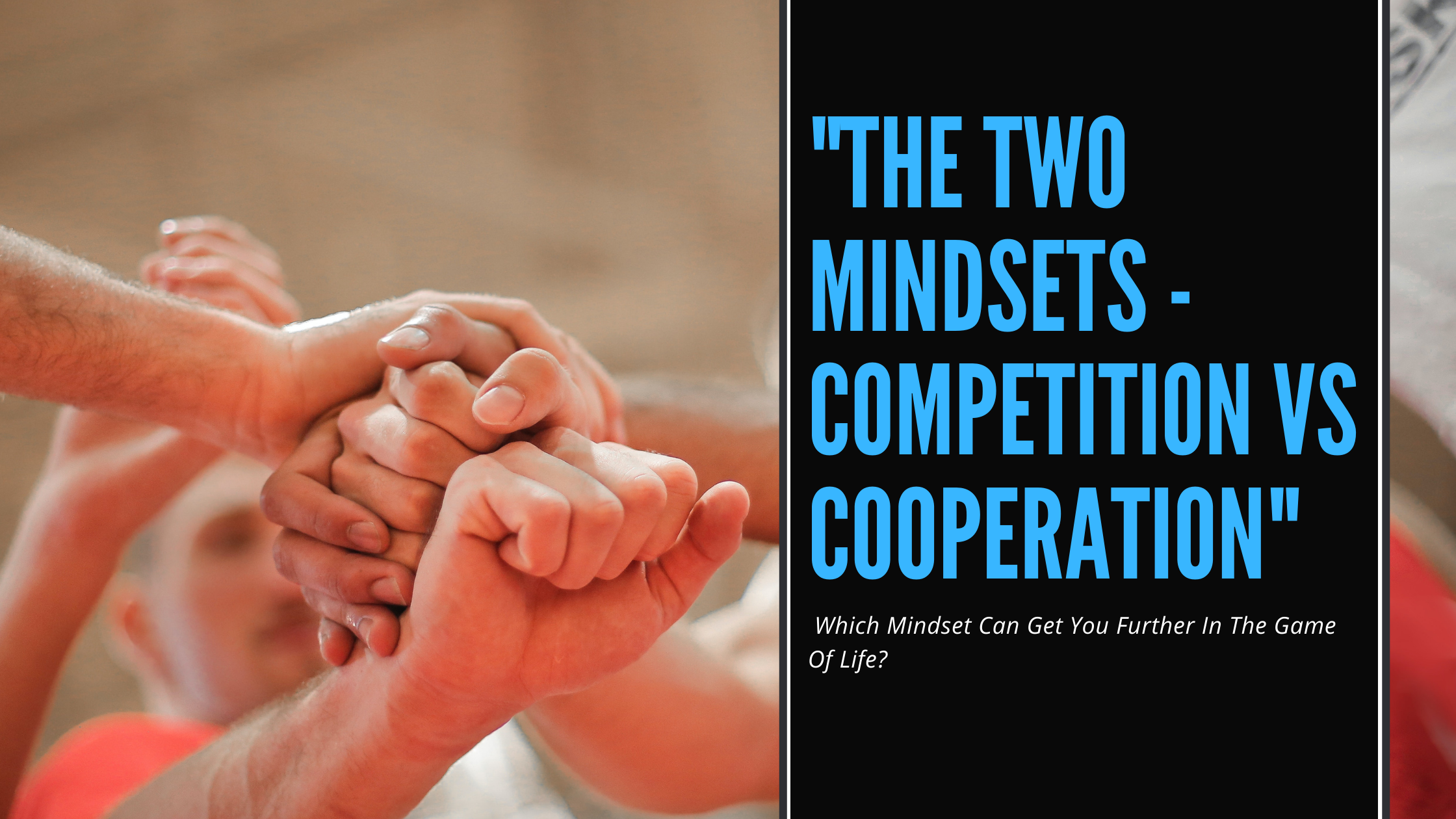 Photo by Andrea Piacquadio from Pexels

Which Mindset Can Get You Further In The Game Of Life?

Mindset, mindset… And mindset again! Oh, the wonders it does.

Would you describe yours as a competitive or cooperative mindset?

Well, in case you are anything like me, the answer varies.

For example, in school, I was always very competitive with my grades, and to this day, I still am.

But when it comes to friendships and other types of relationships (hint: especially business ones), I believe that it’s crucial for us all to cooperate so we can be of mutual benefit.

The two mindsets may seem different, and as if you are bound to just one, but truth be told, they both serve a purpose, and the key is knowing which one is needed at certain points in our lives!

Sometimes we need to be more competitive because it brings out our best qualities and pushes us to succeed, whereas other times, we need cooperation because of relationships we have with others who will help us get where we want.

In this article, I’ll discuss both mindsets and their main characteristics, and in the second part of the series, I’ll tap into the more practical question – Which one should you abide by?

And so, are you ready? Let’s read!

Survival Of The Fittest

In 1859, Charles Darwin published “On the Origin of Species,” which was a great advancement to the idea of the “survival of the fittest.”

He was one of the first people to continue developing this theory that had been previously proposed and, in this case, extended by none other but Mr. Darwin himself.

The ways in which Charles Darwin’s views on evolution have contributed to how it is currently understood can be seen in many areas, but there was one main, more important point that his theory made.

The point is that nature is all about competition – It’s either I eat you, or you eat me.

According to the theory of evolution, survival is based on how fit you are for the environment you live in.

If you’re not fit enough, you’ll get consumed by the fitter, stronger species in your environment.

And well, looking at nature, that does make sense in some ways.

Perhaps, this theory is what instilled in people the belief that life nowadays, too, is a game of “survival of the fittest” – This is what gave rise to the so-called competitive mindset.

What Exactly Is The Competitive Mindset?

The competition mindset is all about winning.

It doesn’t matter if you win by stealing, cheating, or just being better than the other person.

The point is that you win, and that’s it!

There are no second-place winners in this game of survival of the fittest.

This type of thinking has been around for a long time because it makes sense for people to want to be on top and stay there.

After all, we’re living in a society where success equals power.

But while striving to be number one may work sometimes, it can also lead people down a dark road which will only end up hurting them in the end.

Hint: If you eat everyone on your way to the top, you’d have no one to celebrate with?

So what should we do, is the question here?

The cooperative mindset is about working together to accomplish a common goal.

This type of thinking has been around for many centuries, and it’s not just limited to humans – Animals also engage in cooperation.

In fact, different types of cooperation can very well be observed, even in nature where it’s considered that everything is competition-based!

But what does this have to do with success, one may ask?

Well, it’s pretty simple – Having a cooperative mindset means that you’re willing to work with other people and put aside your personal goals for a while for the sake of achieving a collective one.

In other words, if you’re looking for success, then don’t forget that it can’t live outside of healthy relationships!

After all, there’s no real meaning behind the word “success” if it’s being used without a single reference to helping other people reach their goals as well.

Yes, many people consider themselves a “one-man army,” but in reality, you are never really alone.

If you feel like you’ve achieved something entirely by yourself, odds are you fail to realize and give credit to the side contributors to your success. (even if they’re passive)

If this article sounds interesting to you thus far, wait! I have more for you in line.

Keep an eye out for part 2 of this article series, where I’ll touch on interesting details about this topic, such as the traits of the two mindsets and how to integrate them!